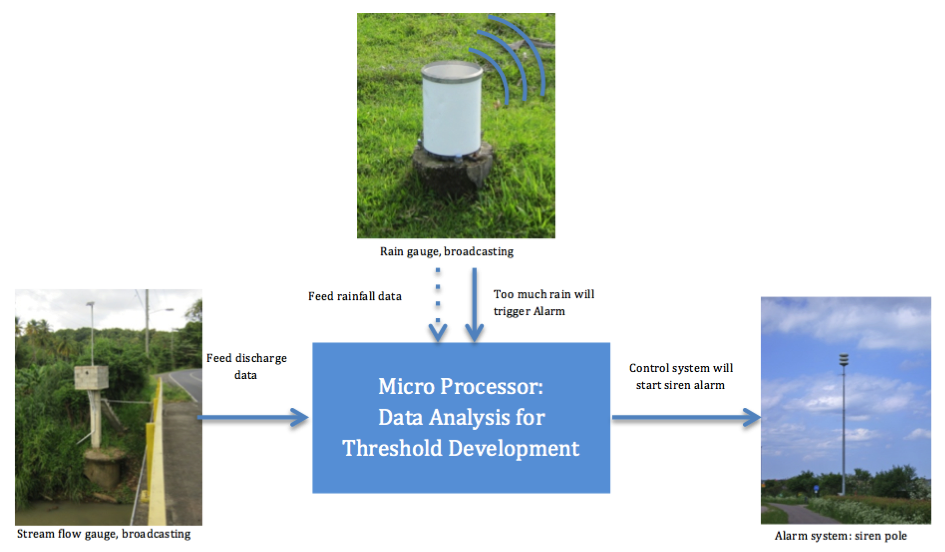 The Government of Australia has extended to the Government of Saint Lucia an accountable cash grant for assistance towards a flood early warning system and hydrological monitoring for water management and disaster risk reduction. The project is being executed through the Saint Lucia Water Resource Management Agency (WRMA). The overall purpose of the project is

From the 1960’s, the Ministry of Agriculture, Lands, Forestry and Fisheries Saint Lucia has been monitoring rainfall and stream flows in some of the watersheds across the island. Main income generated in Saint Lucia at this time was through agriculture, and hence the hydrometric data obtained was used primarily to assist in developing irrigation for agriculture. Since then, the focus of hydrometric data collection has changed and non-agriculture related data users have increased in numbers. Therefore, the hydrometric network needs to be adapted to account for these changes.

As a consequence of climate change, heavy rainfall evens such as those in conjunction with tropical storms occur with higher frequency and larger magnitude causing more severe damage to Saint Lucia’s communities than in the past. To reduce Saint Lucia’s vulnerability to the impact of heavy storm events, flood early warning systems (FEWS) will be installed in the most vulnerable communities. The existing hydrometric infrastructure will be used to monitor storm events and to operate the FEWS. Therefore, the equipment needs to be upgraded and expanded.

The principal agencies operating hydrometric system are the Saint Lucia Meteorological Services (Met Office) and the Water Resource Management Agency (WRMA). WRMA operates 27 rainfall stations, of which 4 are manually operated, 4 stations are equipped with data loggers and are broadcasting data via telemetry systems and the remainder 19 stations are recording stations for manual data retrieving. Met Office operates a network of 19 automatic weather stations (AWS) that record data on rainfall and temperature and some stations on additional parameters. All stations are linked through a VHF telemetry system and are capable of sending real time alarms and broadcasting data to two central data collection computers. In addition to the rainfall gauging systems, WRMA operates 3 water level gauging stations at two rivers in Saint Lucia.

For the installation of the FEWS it is planned to use the AWS operated by Met Office as backbone and supplement the existing infrastructure with the necessary equipment to operate FEWS. The AWS operate with equipment make HydroLynx and the equipment configuration requires mainly proper maintenance and occasionally additional equipment elements to be useful as stations for the FEWS. However, many of the stations to be used are not operational and need to be repaired. The stations’ central control system is outdated and needs upgrades. Besides the broadcasting rainfall gauging stations siren systems and stream flow gauging stations will be installed for the FEWS.

Sven Homscheid Hydropower + RE Consulting was engaged by the Government of Saint Lucia to review the country’s hydrometric network, design and specify the Flood Early Warning Systems and assist in its procurement and installation, and to establish a hydrologic model for Saint Lucia.