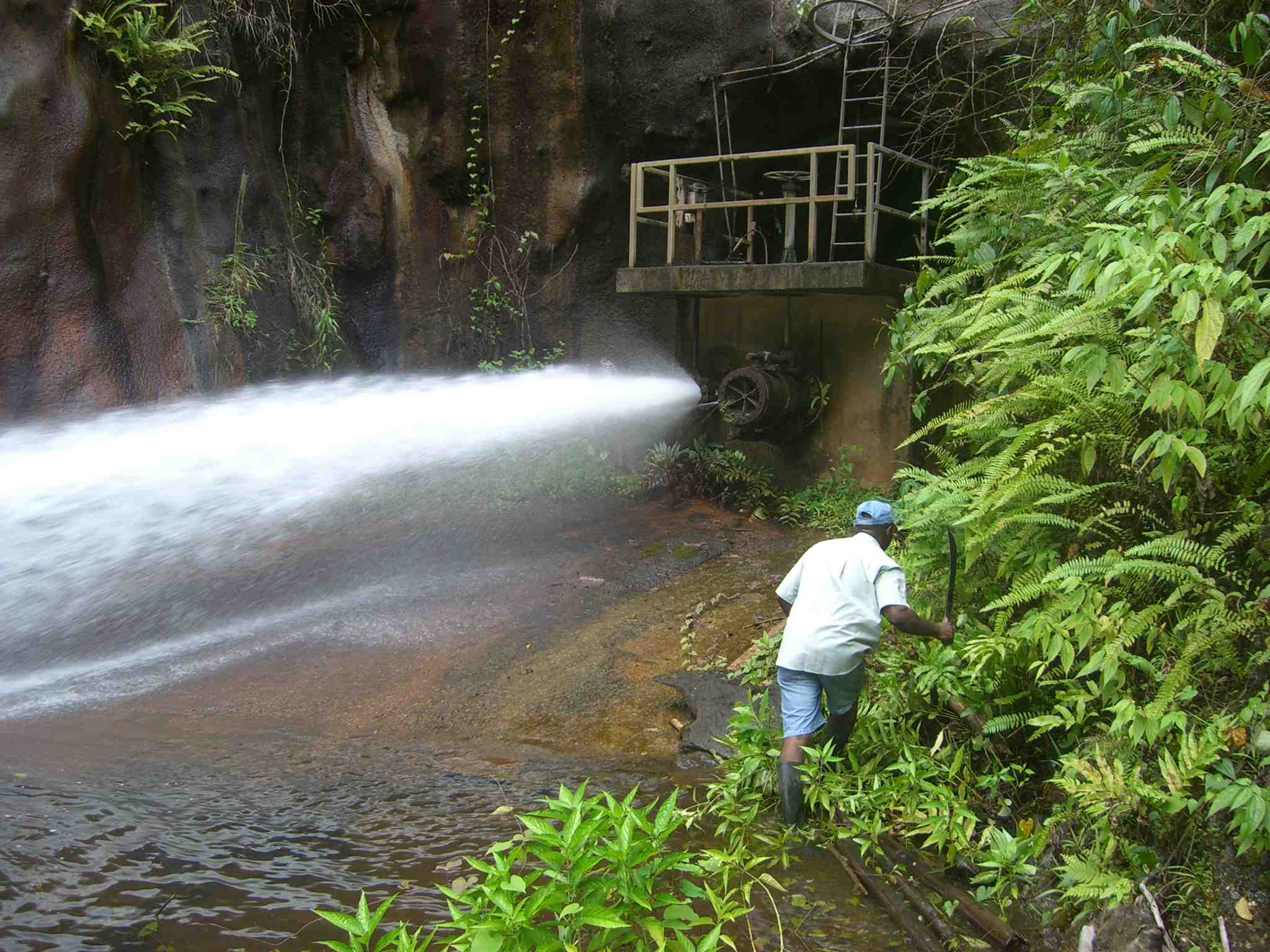 The John Compton Dam is located in St. Lucia’s center and impounds the Roseau Reservoir from the Roseau River. The dam was built in the mid 1990’s and inaugurated in 1996 as drinking water reservoir. A pumping station at the toe of the dam pumps drinking water in the national water supply system that supplies the island’s north. Although the inclusion of a hydropower plant was analyzed within the feasibility study of the dam in 1986 and found to be technically and economically feasible, the plant was never built.

In recent years high sedimentation rates have reduced the reservoir’s active storage significantly and long before the anticipated time. The sediments block the low level outlet that is supposed to feed water into the pipe foreseen for hydropower generation. Plans are underway to remove a significant portion of the sediments to reestablish the original active reservoir storage volume, which is suggested for financing from the Caribbean Development Bank, CDB.

For the 2015 feasibility study Sven Homscheid Hydropower + RE Consulting analysed the option to include the hydropower plant in the financing package of the reservoir rehabilitation works. Based on the available rainfall records, the reservoir inflow series was generated, from which the amount of water available for hydropower generation was estimated by using a hydrologic model that considers drinking water abstraction, reservoir storage effects and spilling effects. The riparian flow of about 70 liters per second is supposed to remain in the river as minimum flow and will be used through a separate turbine for which a pump is used that operates as turbine.

A solution was developed for the intake of water from the reservoir even when the sediment level would increase again to today’s levels. For this purpose an underwater intake structure made from precast concrete rings and with an inclined trash rack were designed. This structure would be constructed under water and would represent the technically most challenging part of the project.

The best turbine option was identified to be a 300 kW Diagonal type turbine (“Deriaz” Turbine) as main turbine and a 36 kW pump as turbine for processing the riparian flow. Depending on the amount of water being abstracted as drinking water the hydropower plant would generate between 811 and 950 MWh per year.

Two different options were considered for the use of the electricity: feeding into LUCELEC’s grid at a feed-in tariff yet to be fixed or using the electricity to operate drinking water supply pumps isolated from LUCELEC’s grid. For the purpose of the feasibility study a feed-in tariff was estimated, which represents the avoided fuel cost for LUCELEC’s power generation with diesel. For the option of WASCO using its own power in the pumping station the entire electricity tariff would be offset.

All analysed options show good economic performance with good IRR for the feed-in option and even better IRR for the pumping station option. Levelized cost of electricity generation (LEC) are significantly lower that the expected feed-in tariff and the electricity purchase tariff to which it compares.

The environmental impact of the project was analysed and found to be limited only because the dam construction that led to the main impact was built already. The use of the minimum flow to generate electricity was found to be an incentive for permanent minimum flow release and hence would improve the current situation. The overall project would strengthen the owner’s resilience against climate change impacts because it would allow the water company to operate the drinking water pumping station even when the public electricity supply grid is down after, for example, hurricanes as experienced in 2010.