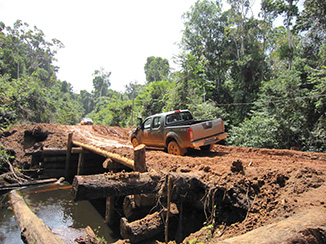 The Wamakaru Hydropower Project will use the Wamakaru Falls, also known as ‘Jordan Falls’, located in the Kanuku Mountains some 45 km east of Lethem in Guyana’s Region 9. The waterfalls offer a geodetic head of some 195 m at a design discharge of 1.9 m³/s, which facilitates a generation capacity of some 3.2 MW at an average annual electricity generation of some 26,000 MWh/a. The project was studied in a Feasibility Study in 1982, which has proven its technical and economic viability.

The project would supply clean, cheap and permanent electricity to the town of Lethem, the villages of Parishara, Nappi and Haiwa with electricity. In an additional scenario, a rice farm at about 65 km distance from the powerhouse would be a prospective off-taker of a good share of the electricity, which would allow the connection of Marakanata, Kwatata and Yupukari allowing another 900 unsupplied residents to be connected to permanent power supply.

In January 2014, the Government of Guyana hired Sven Homscheid Hydropower + RE Consulting to formulate a project concept and summary proposal to be submitted to funding agencies for granting of concessionary loans. The services rendered are: